The Probability of Default (PoD) of a company is the central concept behind a conventional rating. Ratings constitute a fundamental link between markets and investors. Their importance cannot be overstated. However, traditional ratings, according to the Credit Rating Agencies themselves, are merely opinions. The process of computation of a Probability of Default of a company is not only subjective, it lacks transparency and, given the fact that it is not a strictly scientific process, it may be manipulated, leading to conflicts of interest and fraud.

The Big Three rating agencies have been providing ratings since the beginning of the 20-th century. The world was very different then. Traditional ratings have become dangerously outdated and, most importantly, not suited for a turbulent economy. As the complexity of the economy grows, conventional ratings produce questionable results. Mathematically correct but irrelevant. This has become apparent in 2007 when Credit Rating Agencies have misled investors and contributed significantly to the economy meltdown. The new Resilience Rating concept described herein has been engineered specifically for turbulence and a fast economy dominated by shocks, bubbles and instability. Markets are not efficient. In Nature there is no such thing as equilibrium. New approaches are needed.

Conventional ratings will surely continue to be used in the foreseeable future. However, in order to provide investors with new and objective knowledge and insights we propose a novel, resilience-based rating. Increasing complexity and turbulence are, with all likelihood, the most evident and dramatic characteristics of our global economy. They are also the hallmark of our times. In such a context, a Probability of Default rating is irrelevant and potentially misleading. Resilience, or the capacity to withstand shocks, on the other hand, is a measurable physical quantity. It is particularly significant in situations of high turbulence, shocks and quickly changing conditions. A resilience-based rating is widely applicable and can be used to measure the state of health of companies, stocks, portfolios, funds, funds of funds, systems of companies or cities and national economies. In our turbulent economy, which is fast, uncertain and highly interdependent, extreme and sudden events are becoming quite common. Such events will become more frequent and intense, exposing fragile businesses to apparently unrelated events originating thousands of kilometers away. This mandates that companies and investors focus not just on sheer performance but also on resilience, building less complex, less fragile, healthier businesses. High resilience means survival and sustainability. However, the key aspect of Resilience Ratings is that they are of holistic and systemic nature. This is because they may be computed not just based on fundamentals, but also on data related to a company’s clients, suppliers and any relevant macro-economic parameters. But most importantly, resilience-based ratings are science, not opinions. Numbers, not sensations.

Resilience, or Resistance to Shocks (RtS) is measured on a scale from 0% to 100%. Values close to 100% denote high stability and ability to absorb turbulence and shocks. Low values, on the other hand, reflect fragility which may affect long-term sustainability.

The present article provides an interesting comparison of conventional versus Resilience Ratings for over 500 companies listed on the S&P, the Dow and the NASDAQ. The analyses have been based on quarterly Standardized Balance Sheets. 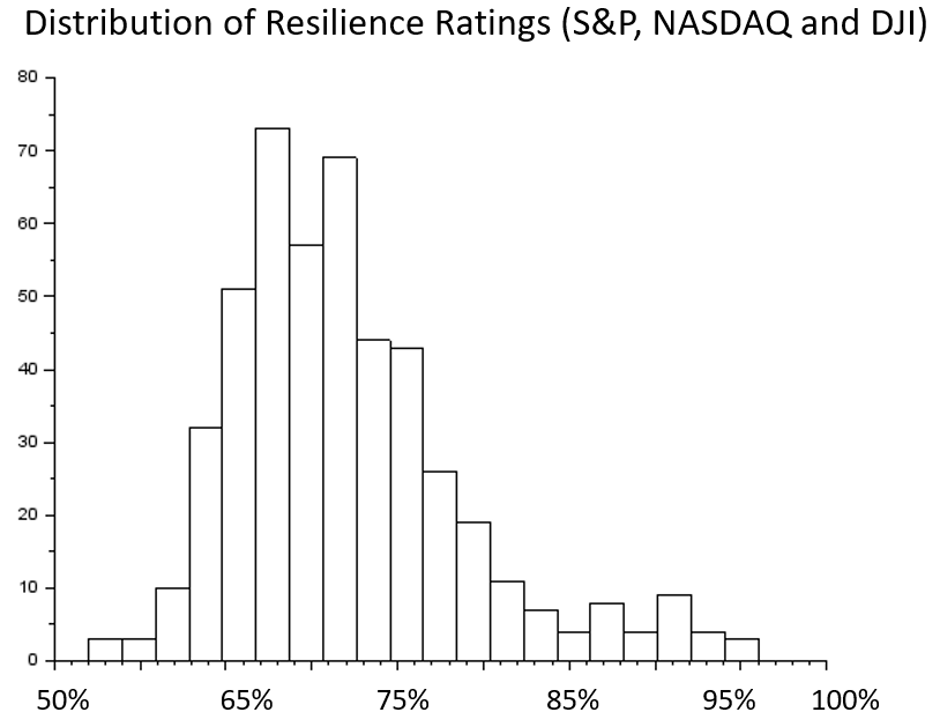 The comparison between the conventional Long-Term Probability of Default ratings and Resistance to Shocks ratings is illustrated in the figure below. 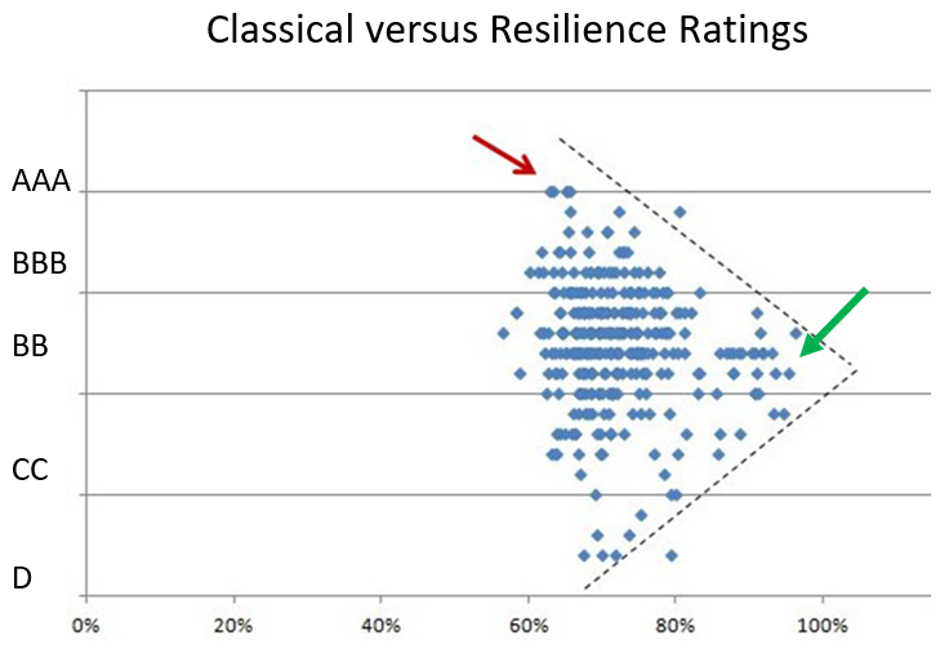 Of the over 500 companies, only 5 are AAA, i.e., Prime Grade (see red arrow). The majority of the companies have a classical PoD rating in the Lower and Upper Medium Grade with a spread in terms of Resilience Rating in the 55% to 90% range. Finally, 73 companies have a rating that is below Speculative Grade. With one exception, most of these have a Resilience Rating ranging from 60% to 80%.

In essence, we have a nearly triangular domain which prompts the following conclusions:

The main conclusion of the study is that triple-A ratings do not necessarily imply high resilience, hence sustainability. This is, to a large degree, not at all surprising. In essence, these cases correspond to situations of high performance which comes at a price: fragility. An analogy that immediately comes to mind is that of a formula one car – great performance for very short periods of time but at a very high price. One has to choose: high short-term performance or high sustainability. It is not easy to have both.