While the biotech sector had long enjoyed investors’ attention, it was never as pronounced as around the time the pandemic was felt around the world. However, as 2022 unravels, so has the interest, with a steady downward trend in stock valuations across the board. The reasons behind the ongoing market slowdown are complex and multifaceted. Let’s start with a broad analysis of the biotech sector.

For a broad analysis of the sector, let’s consider 4 popular Exchange-Traded Funds (ETFs): the iShares Biotechnology ETF (IBB), the ARK Genomic Revolution ETF (ARKG), the Invesco Dynamic BioTech & Genome ETF (PBE) and the VanEck Biotech ETF (BBH). As of January 3 of this year, these 4 ETFs collectively accounted for nearly $16.2 billion in Assets Under Management (AUM).
Let’s consider a series of yearly “snapshots” in May of 2019 through 2021 – along with an additional snapshot at the dawn of this year as well as the end of April each. Companies incorporated in the U.S. and Canada as well as U.S./Canadian companies headquartered in Ireland, Cayman Islands or Jersey will be grouped into the “North America” region. Similarly, all companies from Europe (including the United Kingdom) will be grouped into the “Europe” region. 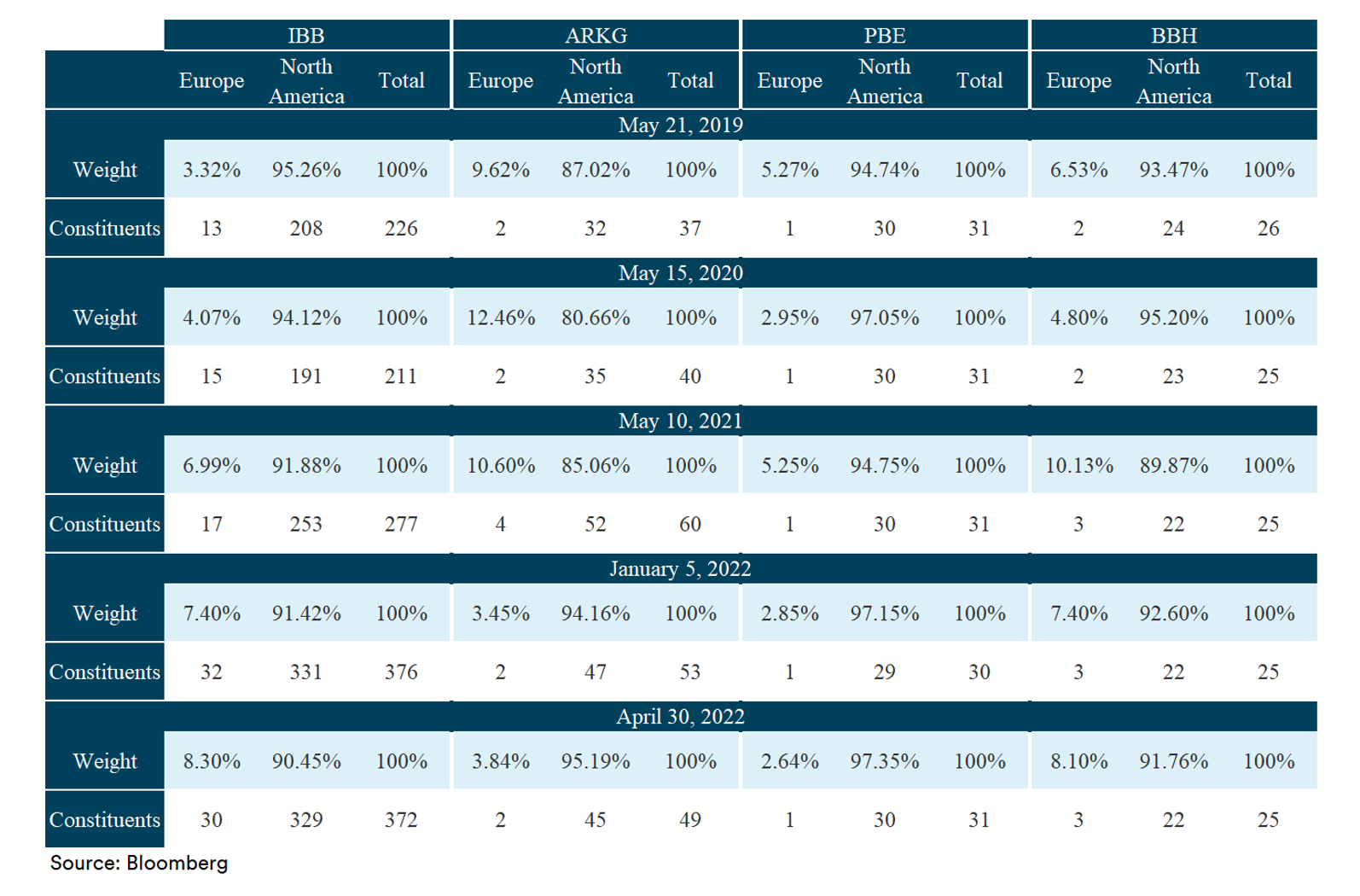 Now, ARKG is an “active ETF” – the holdings’ weights are based on the fund manager’s vision for the potential inherent in technological innovation by the holding company in creating future value. The “active ETF” structure is highly flexible: the fund manager can rapidly alter holdings as long as investors are made aware of the changes made by day’s end.

In contrast, the other ETFs are driven by rules-based index methodologies derived from either the qualifying stocks’ fundamentals (PBE) or market capitalization (IBB and BBH) that are applied at set intervals (typically quarterly) in the year.

Now, ARKG’s investment methodology is proprietary, i.e. it isn’t publicly available unlike the other ETFs. Ark Invest buys into companies that it deems to have the edge necessary to be a disruptor while the other fund managers rely on objective numbers and set criteria. Almost all of the ETFs have a heavy concentration in stocks of companies based in the U.S. – home to the world’s most overvalued equity market.

A record 44% of fund managers responding to a monthly survey conducted by Bank of America Merrill Lynch in June 2017 considered U.S. equities to be overvalued. Deloitte’s surveys reported that most Fortune 500 CFOs and fund managers held this belief in 2020. Mr. Charlie Munger, Vice Chairman of Berkshire Hathaway, reiterated this in 2021 and added that the market will correct soon.

By the end of 2021, it was estimated that 56% of U.S. adults own stocks. By contrast, outside of Estonia – where it is estimated that nearly half the households own stock – this number varies between 15 to 35%. In Germany, for instance, the Deutsches Aktieninstitut estimates that around one in six citizens over the age of 14 owned stocks in 2021.

The reason for this disparity across the Atlantic might be attributable to a variety of reasons. For instance, U.S. media is replete with voluminous financial market reportage and analysis while European media tends to be a little more muted. Another possible attribution could be the low savings bank interest rates in the U.S. versus Europe. A more concerning factor could broadly be described as the “Equity Trap”: with treasury yields maintained low in the face of rising costs of real estate and consumables, there is simply no option outside of being invested in markets such as equities, commodities, and the like for those seeking monetary value preservation or growth.

While European nations offer social safety nets of varying strength, social security measures in the U.S. are perceived as being relatively threadbare. This possibly intensifies the pursuit of seeking value via the markets in the U.S.

When it comes to equities at least, the overvaluation issue can be put in more stark terms when considering the ratio between stock prices and fundamentals. Given that IBB has by far the largest number of holdings on both sides of the Atlantic relative to the other 3 ETFs, let’s parse out the ratios across the “snapshot” dates for a clearer picture.

Let’s consider three ratios comparing the stock price of IBB’s constituent companies to their fundamentals – the Price to Earnings (PE), the Price to Sales (PS) and the Price to Earnings (PS). These ratios can be imagined to form a 3-dimensional axis that would describe a plane along which the price is observed. Each axis, in theory, should have the same effect on the plane. In practice, this does not hold true.

The prospect of overvaluation has an interesting effect on these ratios as reported by data services such as Bloomberg: metrics that are too high or too low are not reported as they’re not considered to hold any meaningful information for the investor. Thus, the proportion of tickers with unreported PE ratios relative to total number of tickers is calculated in both regions as well as the ETF in total for each of the “snapshot” dates.

Given ETFs don’t have overall ratios, proximate aggregations of these metrics are carried out in two formats to arrive at an effective proxy for regional contribution:

The picture that emerges is quite interesting. 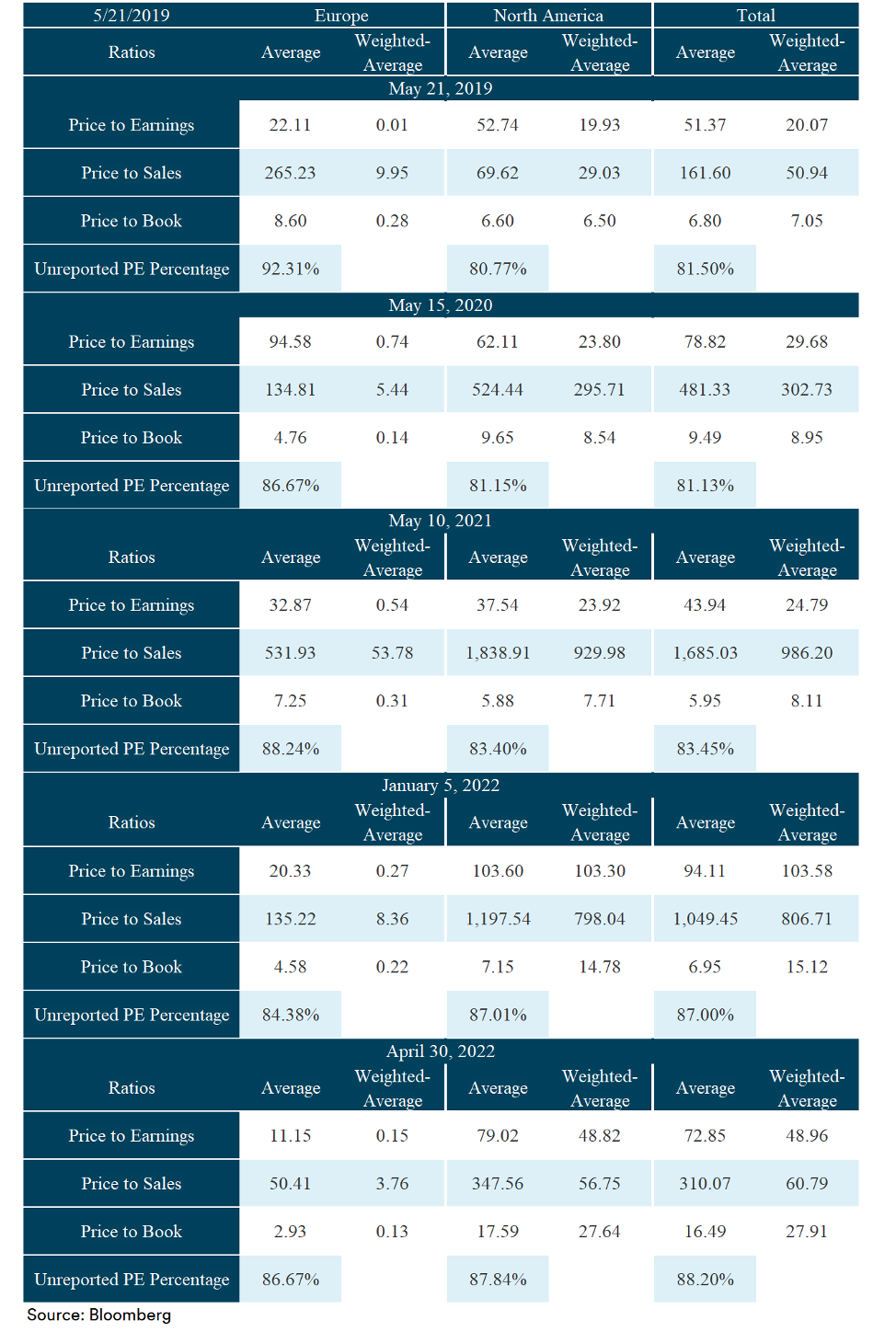 The core observations discernible are:

The massive preponderance of unreported PE ratios in both ETFs is an indicator of how overvalued the biotech sector is. Overvaluation influences volatility which, in the economic picture emerging, makes a continued downward trend more likely than the converse. For Q1 this year, Morningstar’s Star Rating system assigns ARKG a 1-star rating over a 3-year horizon and 2-star rating over a 5-year horizon. IBB does a little better (but not by much): 2 stars in both horizons as well as the 10-year horizon.

Let’s now gauge investor sentiment via AUM trajectories between each “snapshot” date. May 2019 would be the “zero line”, i.e. relative to itself, the net change in AUM and price is zero.

Until 2022 began to approach, ARKG’s AUM “deltas” were greater than those seen in prices, suggesting strong capital inflows. This was generally not the case with the other 3 ETFs – the “delta” pattern indicates only modest upticks in capital inflows (with the more concentrated BBH being the best attractor).

Since 2022 dawned, ARKG’s “deltas” suggest a disproportionately larger outflow in the face of a downturn. IBB and PBE show a slight outflow while BBH’s near-identical “deltas” in both AUM and Price in the most recent date suggest that investors are holding steady.

This variable behaviour between BBH and IBB – both with market capitalization-driven constituent selection rules – lie in the “size effect”. The former favours the largest 25 companies in the sector whereas the latter is more diversified. Given the overvaluation, smaller overvalued companies are deemed more vulnerable than larger overvalued companies despite both categories facing downside risk.

Consequences for Financing and Investors

For biotech startups and privately-held companies; rosy stock valuations meant the cost of securing funding to expand or even go public were relatively lower. Now, as overall growth outlook is receding, there is an implication that terms for negotiations will be a little tougher. Acquisitions by larger publicly-held companies will also be a little dearer as the resulting stock awards to the acquiree would now be costlier in terms of number of shares.